Oman is a country situated in the Arab peninsula. This means that Oman is situated within one of the hottest geographical locations on the earth.  As most of Oman’s’ significant sites and reasons to visit are outdoors, knowing how to make the most of your time there and staying safe in the weather is important.

But what does the regular, day-to-day climate of Oman actually look like? 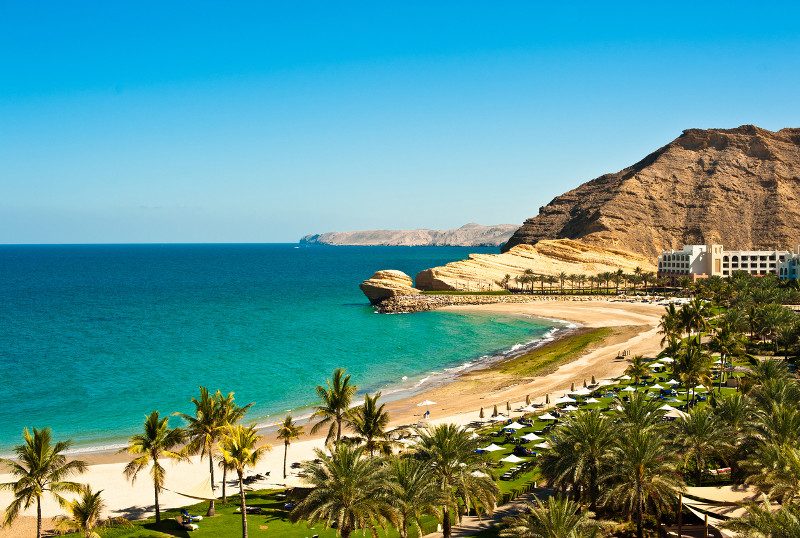 In Oman, the climate is tropical desert almost everywhere, with some summer rains in both the northern and southern mountain areas. During the summer months, the monsoons bring in clouds  along the eastern coast. This means the country experiences pleasant high and low temperatures all year round. Most of the country lies within the zone of the dry tropical climate. Muscat, the capital of the country, is considered one of the driest cities in the world.

The monsoon, from mid-June to mid-September, is due to wet currents blowing towards the Asian continent, bringing limited effects in terms of rain, but it’s nonetheless able to influence the climate of the country.

As mentioned, Oman is situated in the Arab Peninsula. This means the Oman climate is an arid climate and that temperatures during the summer months can soar. In some areas it has been recorded to reach up to 50 degrees Celsius.

Oman temperature is often high, with average temperatures in the Capital of Muscat levelling around 30 Degrees. This high temperature is in quite a strong contrast to the winter months of Oman that averages somewhere between 18 and 26 degrees for a much cooler period.

To put these temperatures into perspective, the average summer temperature in the UK is only around 19 Degrees, and the winter temperature is about 6 Degrees. This means that Oman is hotter in winter than the UK is in summer.So if you’re ever travelling there, make sure to pack a fan.

Along the coast of the Gulf of Oman, the climate is desert, sunny all year-round, with a few winter spots of rain, more likely in the far north, ie the Musandam Peninsula, an exclave of Oman in the United Arab Emirates, with an average rainfall of 15/20 millimeters per month from December to March.

This area is very hot in summer, with highs around 37/38 °C on average, and the humidity of the sea that makes the heat oppressive. When the wind blows from inland, the humidity drops, but the temperature can get close to as high as 50 °C.

The winter temperature is pleasant: the daily average is around 20 °C in the far north and 21 °C in Muscat, Oman – the capital.

In contrast to the northern tip, along the northern coast (called Al Batinah), where Muscat is located, the hottest month is June, reaching 40 °C. While in July and August, cloud banks brought by the southwest monsoon can slightly lower the daytime temperature, dropping  to 38 °C in July and to 36 °C in August.

Rainfall in Muscat is definitely scarce, in fact, it amounts to 100 millimetres per year. In summer, despite the southwest monsoon, it almost never rains.

Oman is hot. Very hot. That much we have easily been able to establish. But what does this mean for the regular weather and rainfall?

The rainfall in Oman varies, depending on whereabouts you are and your elevation. Rainfall in coastal areas and the more sea level plains reach up to 100mm per year for a predictably low level. However, this increases drastically as you climb one of Oman’s many mountains, sometimes up to 9 times as much, reaching 900 mm of rain falling.

What might surprise some people though, is that even with such a high average temperature, and rather low rainfall, every few years the more mountainous areas of Oman receive a covering of snow.

The area of Dhofar is a bit of an exception to the norm of Oman. This area experiences a monsoon season during the months between June and September. This brings with it increased rainfall, meaning streams and bodies of water are much more full and usually constantly running.

On more rare occasions, a cyclone can hit Oman. This comes from the North Indian Ocean but thankfully isn’t very common. As always these cyclones bring with them heavy rain and winds.

Oman is located in the northern hemisphere, and as such the seasons are the same as in the UK. Thanks to a location closer to the equator and being situated by the Arabian Sea means the seasons are generally warmer than in the UKs. The seasons are as follows:

At spring temperatures rise. Average daytime temperature during March is 31 °C and at night, temperature drops to 21 °C. April continues warming tendency. Daily range goes up to 37 and 25 °C at day and night respectively. Coastal waters are a pleasant 27 °C with rainfall and precipitation at low levels during this season. In fact, the total amount of it through two months is about 40 mm at 3 to 4 rainy days.

During May and the following two months of summer are completely dry. With the absence of rain, there are no significant winds. In addition,Spring air becomes really hot, with 42 °C at noon at 30 °C (86 °F) at night. Coastal waters are warming up to 29 °C.

Summer begins with an increasing amount of daylight hours to 11. Naturally, temperature grows as well . However, growth isn’t so significant. Daily averages are only a couple of degrees higher than they were in May. There’s no precipitation except some rain in southern regions and morning fog over the sea.

During August, the temperature begins to drop. Daytime averages are about 39 °C (102 °F). At night, the air is comfortable with about 28 °C (82 °F). Even one rainy day is possible with the total monthly amount of precipitation about 20 mm (1”). The sun is very active at this time, thus all available precautions to sunburns are needed.

First half of September in terms of weather is similar to summer. Yet, later this month, temperatures goes down and by October reaches 37 °C (99 °F). Later in October weather is good enough for opening tourists’ season. Water warms up to 29 °C and each day is sunny with no signs of significant precipitation or clouds.

November temperatures range from  32 and 22 °C (90 and 72 °C) at day and night respectively. All kinds of seaside activities are available and sea water is a pleasant 27 °C (81 °F). Autumn in Oman will be appreciated by travellers who like the edge between warmth and heat.

Thanks to the moderate weather, winter and March is the peak of tourism in the country. Through whole season daily temperatures range from around 27 °C to 19 °C during the day. December and January are great months for diving in the neighborhood of Muscat This is because January temperatures and humidity levels are at pleasant levels. Water of the sea and the gulf is comfortable too with temperatures of 24 °C and calm waters.

Although winter is the rainy season, rainfall is still low with the total amount of precipitation hardly reaches mark of 110 mm except the southern region of Dhofar, which experiences almost tropical showers. The occasional rains make the air fresher and rather promoting than interfering winter vacationing in the country.

What Should You Pack For The Weather on Your Holiday to Oman?

As you can see, the weather in Oman is luckily quite predictable, but you must still be smart about how you prepare. If planning to travel in the summer months, you must take caution when travelling outside for extended periods.

Make sure to cover up with light and breathable clothing when travelling in direct sunlight and always wear a high factor sun cream. Make sure to take appropriate protective eyewear and even pack a light hat (trust me you don’t want sunburn on your scalp).

In summer bring loose-fitting, lightweight clothes, made of natural fabric (cotton or linen), a desert turban, and a sweater and a scarf for air conditioned places. For high mountains, bring light clothes, a sun hat, and a sweatshirt for the evening.

If you have the option, try not to travel at the peak of midday in the direct sun, to prevent exposure to the highest temperatures and to minimise exposure.

But one thing above all must be remembered:

Oman is a dry country. Regular water consumption must be maintained to stave off unwanted effects of heat such as sunstroke and  dehydration. Always carry water no matter where you go and even if it is available at the end of your journey.

When to visit Oman?

To maximise your enjoyment of the sun and minimise the effects of the greatest heat levels, knowing when to travel is essential. If you wish to plan around the weather then it is best to avoid the main summer months.

Avoid travelling between June and September as the temperatures can reach unbearable levels. Travelling between October to June allows you to take advantage of a much more pleasant climate, while still enjoying the benefits of the sun and weather that Oman has to offer.

The best time to visit Oman, to go on excursions to the desert and the mountains, or to stroll around the cities, is in winter, from December to February, which is sunny, pleasantly warm on the coast and quite warm in the desert during the day, but cool at night, and even cold in the mountains.

For a beach holiday, as previously mentioned, the sea is warm all year round; the air temperature is good in the period from November to March, but in November, there is still some risk of cyclones on the coast of the Arabian Sea, while in January, the temperature can sometimes be a bit cool on the coast of the Gulf of Oman, at least for those who are sensitive to cold.

Finally, be sure to have a valid Visa before you travel, to find out more see the link below: